Eurolanche did the exclusive interview with the Finnish goalie of the Avalanche organization just few hours before his first preseason game.

Sami Aittokallio was picked up by the Colorado Avalanche of 107th place overall in the fourth round of 2010 NHL Entry Draft. After two seasons in the elite senior and junior leagues in Finland, and two participations at World Junior Championship, he finally joined the Avalanche organization in the USA last year.

Aittokallio appeared in 27 games for Lake Erie Monsters in the last season. He won 14 of them, allowed 77 goals, gained one shutout, had 89.9 % save percentage and allowed three goals per game in average. He played in fewer games than his team colleague Calvin Pickard. Young Finnish goaltender made his debut in the NHL in April 2013 against Los Angeles Kings. He became the youngest goalie in the Avs net since Marc Denis.

Sami was tremendous in his first NHL game, allowed only two goals, but he had to leave a game after 49 minutes due dehydration. Jean-Sebastien Giguere played in the rest of the game that was lost by his teammates in the shootouts.

Click here for the interview with Aittokallio from the last year.

How do you evaluate your first season in the AHL? What did you learn there?

It was great experience. Being far away from home wasn't always easy but I feel like I'm more mature now and I believe this time things are a lot easier. Last year started well but I had too much ups and downs. Also when I started to feel my game was there I got injured. There is still a lot work to do but I'm willing to do everything it takes to get to the NHL. Consistency is the key word, I need to be the guy you can trust in every situation.

Is a big difference between AHL and SM-liiga (Finnish top league)? Was it a big step for you?

Difference is not big. Some teams in Liiga (it's called just Liiga nowadays) are better than some AHL teams and vice versa so it wasn't big step for me.

How do you remember on your first game there?

First game was unreal. We played against OKC in front of our amazing fans in Cleveland. House was packed and I had so much fun playing there. Of course getting first W in the very first game was huge also.

Who has become your good friend on the team?

What was your relationship with Calvin Pickard?

We are good friends and that's huge thing for both of us. We are both great goalies and we push each other to get even better. Season is long and we both are young so it's important to get along and to be able to talk with the other guy.

Do you remember on the day when you got a call from the Avalanche on being called up?

Night I will never forget. I got the call and I was sure I was dreaming. I was supposed to play the next day against Syracuse but things went a bit different.

One more comparison. Can you compare the whole process of the organization in Lake Erie and in Colorado?

Can't really. I haven't spent enough time with the Avs to be able to do that. 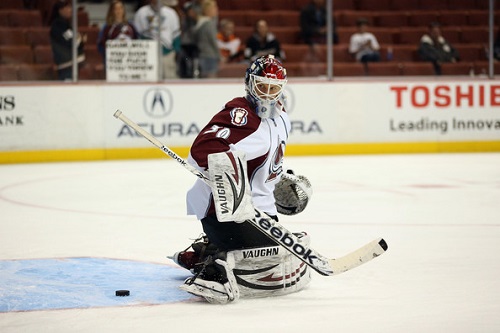 What exactly caused a dehydration that you suffered in your first NHL game?

I don't really know. I drank like I usually do and did everything like always before. I really hope that never happens again because the pain you feel is something you don't want to feel. And it lasts long!

It was very good game for your at all. Were you nervous? What did you feel before and during the game?

I wasn't nervous before game. When I heard I will play against Kings I just decided to enjoy every second. And I did. You play your first game only once so don't worry just enjoy the ride! It's just hockey after all and my job stays the same no matter where I play.

How did you enjoy recent training camp? Do you like new coaches and staff members in the organization? Was it better than last season?

I think we had really good camp this year. Working with Francois Allaire and Jean-Ian Filiatrault was great and I'm looking forward to continue what we started here. I really enjoy working with the whole organization and I can see everybody is looking forward to get this season started and prove we are a lot better team than what we showed last year.

What is your goal for the upcoming season?

I need to get better overall. Like I said before, consistency is the word. Also I want to make sure whenever I get called up, I'm ready! Our fans in Cleveland and Denver deserve to see some playoff hockey this year!

Sources of photos: Cleveland.com and Zimbio.com