Eurolanche did an interview with former Avs defenseman Jonas Holos.

Jonas Holos is a 26-year-old defenseman from Sarpsborg, Norway. He was drafted 170th overall in the 2008 NHL Entry Draft by the Colorado Avalanche. Holos would go on to play the next two season for Farjestads BK in the Elitserien (Sweden) before getting a chance to play for the Avalanche.

He left North America after the season and went to play for the Växjö Lakers of the Elitserien. He played two seasons in Sweden before signing a contract with Lokomotiv Yaroslavl of the KHL.

How did you feel after you finally got a chance to play in the NHL two years after you were drafted?

How do you remember your first NHL game against the New York Islanders?

Well, I was really nervous before the game even started. I remember that a fight broke out right after the opening faceoff (laughs). It was pretty surreal, a great experience. I think I played a decent game, got good ice time from the coaches. It was fun.

You played 39 games for the Avs, how would you describe your tenure in Denver in one sentence?

One sentence? (laughs) Great experience. It’s a hockey town. It’s kinda hard to describe. I didn’t play the first four games, then I got to play 12 games in a row and then I was scratched for like a month. It was hard to just watch games, but I think it made me tougher mentally, so it certainly taught me something. 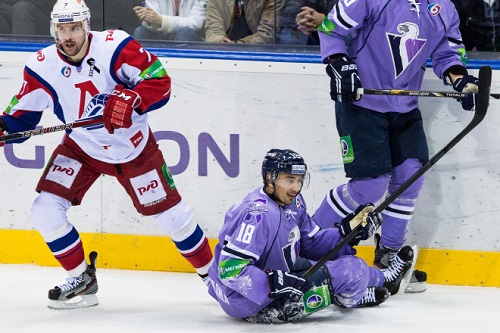 After the season, you asked to be released from the organization. Why?

They sent me to down to the AHL during the season. There were a lot of defensemen higher on the depth chart than me and I had the feeling that I deserved more ice-time than I was actually getting. During the summer, I decided that I’d go home if they would decide to send me down early. I didn’t feel like playing in the AHL would benefit my career. I don’t regret the move since I’m one of top 4 defenseman here.

What did the coaches in North America tell you after the season? How did they evaluate your year?

The coaches didn’t say anything, which was really a problem for me. I didn’t know what to do better and what mistakes I made, nobody told me what and how to improve.

Would you like to come back to Colorado one day?

Of course. I think they still own my rights in the NHL. If they offer me a contract and want me to play in Colorado, I’d accept the offer for sure.

Juraj Hudak did this interview for Eurolanche. He works for the website SZH.sk, where he's responsible for interviews with the visiting players, who play in Bratislava against the local team.