Eurolanche interviewed one of the newest members of the Avalanche organization.

Jesse Winchester became the first acquisition of the Colorado Avalanche on July 1, when the free agency market has been opened. Right-handed center graduated a college in 2008 and then at the age of 25 he signed his first NHL contract with Ottawa Senators where he spent four seasons. Never-drafted Jesse spent 2012/13 season in Finland – firstly he played in the second tier league and with no attractive offers from the NHL teams after the start of the shortened season he decided to remain in Finland, but switch a team for Jokerit of the elite league.

Jesse came back to the NHL one year later. He spent last season representing Florida Panthers. It was his most successful year so far, when he scored nine goals and added nine assists. He was a key member of the team for killing the penalties. He is projected to play for the Avalanche in two bottom lines as a defensive forward. 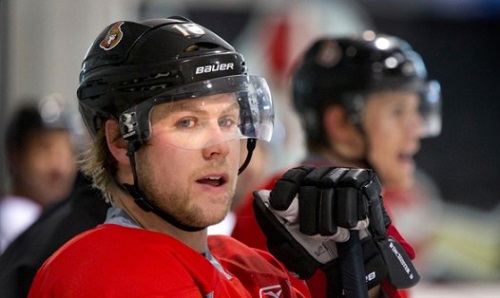 You tweeted your dream come true after you have signed a contract with the Avalanche. Were the Avs really one of your top teams where you would like to play for?

Patrick Roy and Peter Forsberg were my two favorite players growing up, so to be able to play for the Avs after watching them so closely for so many years really is a dream comes true.

Can you explain us the day when you signed the contract?

July 1st was indeed a special day for me and family. When the Avs approached me I was more excited than anything, and jumped at the opportunity to jump on board with such a young and talented team.

Have you talked to someone from Colorado about your primary role on the roster in the coming season? If not, can you tell us your own plan of your role?

I try not to concern myself with where I fit in, or who I play against. That's for the coaches to decide, and for the experts to talk an out. What I can tell you are this: I take pride in being a solid teammate – a guy who puts the teams interests ahead of his own – and I want to be the hardest working player on the ice, each and every day.

What does it mean for you to play under Patrick Roy and Joe Sakic?

Patrick Roy and Joe Sakic are two of the classiest and most accomplished players that I grew up watching. To join a team headed by them, is to join a team which is clearly committed to winning, and I could not be happier or hungrier to join such an exciting group.

You spent a lot of time in NCAA and made NHL debut at the age of 25. How do you remember on this part of your life?

My college hockey experience was amazing. It opened up so many doors for me – hockey wise and away from the rink, and I was so fortunate to graduate alongside some of the coolest friends in the world. On the ice, college hockey allowed me four extra years to improve my game before turning pro which was important because I was never drafted.

You played for two NHL teams – Ottawa Senators and Florida Panthers. Where do you like it more and why?

I loved my time in both Ottawa and Florida. Ottawa was special because I was so close to family and friends and it was a great place to start my pro career, but Florida was great because I was as to reestablish myself as a player in the league. The weather was nice too.

What is your most memorable game of your NHL career?

I have a few special memories in the NHL. Some of my fondest ones are my first game, first goal, and first playoff series.

How do you remember on your experience in Finland?

My time in Finland was a worthwhile experience. I was treated so well, and enjoyed every minute of my time there. The level of hockey was incredible, as were the people that I met.

When you will come to Denver?

I plan to come to Denver for the beginning of September so that I can become acquainted with the city, and team before the season gets underway.