Lauridsen wants to stay with Avalanche

Defenseman of the Colorado Avalanche organization believes he may play in the NHL soon.

Markus Lauridsen joined the Colorado Avalanche organization three years ago, but he has not appeared in a single NHL game yet. Firstly, he started his overseas stint playing for Denver Cutthroats of CHL and later has continued for the Lake Erie Monsters. He was always amongst the last players who were sent to the AHL at the Avalanche training camp. He was never called up back during the regular season. In spite of this he feels he is not so far away to make his dream come true. „If I would compare myself to some players who were called up from Lake Erie to Colorado past year, I think I was very close. But it is hard to say it, because sometime they needed maybe defensive defenseman, sometime eager forward. It depended on what type of player they wanted,“ said Lauridsen to TV 2 SPORT. He plays for Team Denmark at this year World Championship along with his older brother Oliver, who is a member of the Philadelphia Flyers organization since 2009 and mainly plays for its AHL affiliate. 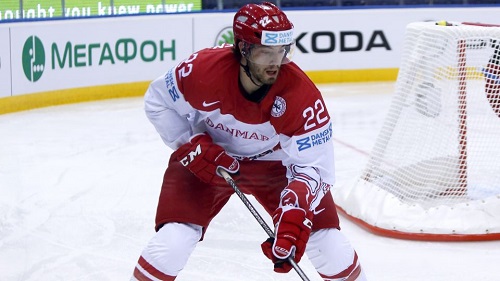 Lauridsen's contract with the Avalanche expires this summer. Young d-man believes his good game at the international tournament may grant him a new contract. „It will be interesting. I didn't hear what they are going to do in Colorado, so it will be also about waiting. I hope I would play good at WCH, show good game and let's see what happens next then. It is good way to show yourself in the games against the best hockey players. There is always some scouts in the stands,“ said Lauridsen. Team Denmark lost its both first games against Slovakia and Finland. Lauridsen has no point so far, but still believes he can and his team can win next match ups.

Lauridsen played in 61 games past season for Lake Erie Monsters. He was injured a year before and appeared only in 39 games. „I think I moved forward in the past season. I got a little more responsibility and confidence. I played more than in the past. I was injured then and it was tough for me,“ said Lauridsen who is playing at WCH for a third time.

Source of a text and a photo: sporten.tv2.dk

Holos has no team: Comeback to Denver?