Eurolanche interviewed the recent acquisition of the Colorado Avalanche organization.

Colorado Avalanche recently signed one-year contract with Norwegian forward Andreas Martinsen. This news was firstly published as a rumor weeks ago at various websites including Eurolanche.com. Finally, the Avalanche made it official last week. As we informed you at our social networks on Facebook and Twitter, we knew about this acquisition earlier, but we wanted to wait until this interview for our announcement. Well, the Avs were faster. This interview was done in cooperation with Norwegian website www.icing.no where you can read it in the local language version.


Martinsen is 24 years old, but has never been drafted by any NHL team. He was considered to be a prospect for the import to the junior CHL in Canada, but it didn’t happen either. Instead of it, he spent most of his career in Norway, playing for a local team of Lillehammer – the city hosted Winter Olympics in 1994. He was on try-out in Swedish second-tier league in 2009/10 season, but chose to come back to Norway for the next couple of years that became his best in his native country.

After two successful seasons, Martinsen continued his career in Germany, in the local top league in a jersey of Dusseldorf team. He spent last three years there. The past tone became the best for him without a question – 41 points in just 50 games and 5 points in 12 playoffs games. After that, he signed one-year, entry level and two-way contract with the Avalanche organization. Martinsen may become just third Norwegian player who would play for the Avalanche after Anders Myrvold and Jonas Holos. Andreas is very experienced national team player; he represented Team Norway at past six World Championships including this year edition.

Eliteprospects.com says about him: A large, tough forward with a good shot. Enjoys the physical part of the game and crashing the net. Has good speed and decent hands.

Why did you choose Colorado Avalanche? You had offers from Pittsburgh Penguins and New York Islanders as well.

It was the club with the best environment, and I felt it is a place where I have the best opportunity to get into the NHL-team. And also I know they need my type of a player for the roster.

Who in the Avalanche organization contacted you first?

Head of player development, David Oliver. This was in December 2014. He had a great influence on why I chose the Avalanche. 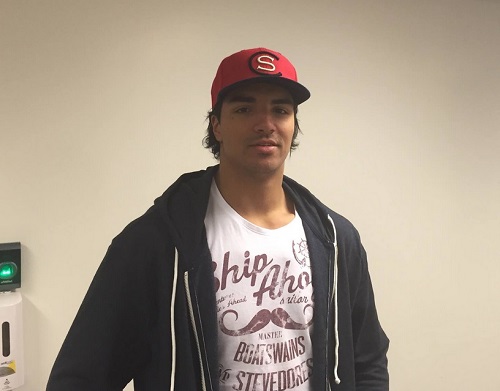 We read about you being signed by the Avalanche before the World Championship. Why it was announced just last week?

I honestly don’t know exactly. It was some kind of the rule I think. I agreed with their offer before the tournament and signed it after. After our final game at the WCH, I could finally release this news. I signed with them right after.

If you made the Avs roster, you would not be the first Norwegian in their jersey.

Firstly, I have to say that even if didn’t make the NHL roster on the first try, I would get what I love – I will be much closer to my dream and I will do anything for it. I am prepared. If I didn't make the roster, I am determined to stay and fight for the spot.

I talked with Jonas Holos about this. Holos wants to come back to Colorado, but only if they offered him one-way deal. I would like to see him there. But my situation is probably better for me now. I am almost 25 years old and I have never tried NHL before. Jonas did and he is older.

What is your natural position?

I prefer playing on RW, but LW is also possible for me. I also played on center position in Germany for one season.

You were close to being drafted to the CHL. Why it didn’t happen?

Several teams were interested in me, but my then-agent didn’t want to sign me for a bad team. So he said to other teams that I would probably not come to play to CHL. The agent was focused on Kitchener Rangers. They had interest in me, but hours before a draft they changed their opinion and chose somebody else. Other teams didn’t pick me because heard rumor that I don’t want to play in CHL. It was very disappointed to me, but also a good lesson too. I needed a wake-up call.

The second bad moment of your career came one year ago when you didn’t play at the Olympics in spite of the fact you didn’t miss any of World Championship since 2010.

I struggle little bit, but it was big disappointment to me that I wasn’t in Sochi. I told myself I am going to show them they are wrong.

Who was your favorite team and player when you were young?

I liked the Avalanche logo and Peter Forsberg. Ever since I started to skate, I had one single dream: play in the best hockey league in the world, in the NHL.

How do you remember on your hockey childhood?

I couldn’t wait to get to the rink. If I wasn’t at the school or sleeping at home, I was skating. I just took my bag and ride a bike to the rink. I couldn’t expect my mom and dad taking me every single day. They had to take care of about my siblings too. 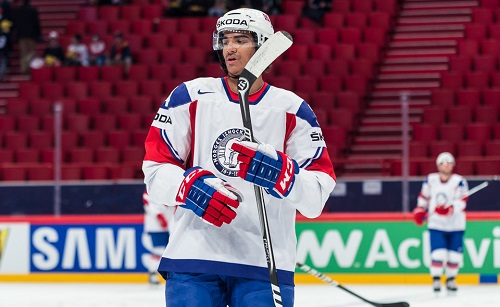 Daniel of icing.no who has been a longtime friend of Eurolanche wrote us his own notes and impressions of the meeting with Martinsen:

- The time is 12 pm, Tuesday morning. The time I scheduled my meeting with Andreas. A text saying he was on his way ensures me that he didn’t forget. Moments later he was present and with a friendly, but firm handshake the 190 cm tall power forward greets me before he sits down at the table in the local restaurant.

- Eager to talk as much as possible about hockey and what he could expect overseas, I smell freshly made waffles from the table next door and it reminds us that we are here to get something to eat too. One thing is for certain with hockey players, they love food and can never have enough. So to keep the big guy on the other side of the table happy, we better bring some food to the table.

- Martinsen’s girlfriend wouldn’t hate it if he is sent down to the AHL during the season. The reason is simple: she would love to see San Antonio, mainly because of the hot weather. For Martinsen himself, the choice is easy though; rather cold and NHL, than hot and AHL.