City of Verbier in Switzerland is a famous location known for the ski tracks and its music festival. Just a few people know that this fraction of Bagnes (Valais) is also where it takes place one of the most famous training camps for professional hockey goalies in the world. Every year a lot of goalies decide to start skating in Verbier after the summer break and one of this goalies is Calvin Pickard, who shared the backup spot with Reto Berra last season in the Colorado Avalanche net. Eurolanche’s correspondent/member and editor of the Heshootshescoores.com (hockey website in Italian language) Nicola Martinetti met Pickard in person and interviewed him for the Eurolanche.com.

Is this the first time you participate at this camp?

No, I actually came here before and I love to participate. It's a nice change from Winnipeg and I think it's a good thing to train in altitude. Verbier is a nice spot and the guys I am training with are great, I am getting a lot out of it.

What do you guys are training specifically?
We are working on our technical game and the basics. It's the first time we are skating on the ice after the summer break and it's good to do it here where no one is watching and you have all the time in the world to find your game again. I am also learning a lot from guys like Jonas Hiller, Reto Berra and some other European goalies that may have a little different style than the North American one. I'm definitely having a good time here.

You started the season in Cleveland with Lake Erie Monsters until you've been called up because of Varlamov's injury. Then Berra got injured as well and you made your official debut in the NHL. What happened next?

It was really exciting. It was kind of a rollercoaster, it all happened so fast in Ottawa. Then I had the chance to play in Montraal as well where I thought I played well. After that I had the opportunity to play a lot of games in the first half of the season while the team and the coaches had a lot of confidence in me and that for sure made me comfortable in then net. It was a fantastic first half of the season.

Did Roy and Allaire talk with you a lot during this period?

Roy kinda left me alone, he believed in me which was nice for me to know. Of course the rest of the staff had confidence in me as well, they all left me alone allowing me to do my things.

Avalanche fans really like your game. You are Canadian, so you are coming from the hockey country. How people in Denver love hockey? Is it similar to Canada?

Yeah absolutely, I love Denver. For all the time I've been there I received nothing but support and the fans are really passionate. The team is very close to be something special and the support we get from the fans helps us a lot on the ice. I hope that it keeps going this way as we move forward. 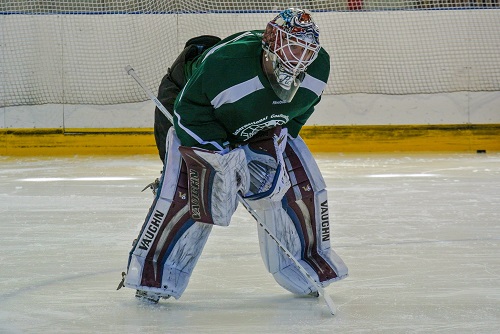 Last season in Cleveland you played with Maxim Noreau, that actually played here in Switzerland for HC Ambrì-Piotta until last season. Do you think he can make the team next season?

Yes he is a great player, I love Max. We get along very well, he is a very good offensive defenseman and if he is playing his game he is pretty much unstoppable. I think he's got a pretty good chance to be in the lineup if he does his things right.

Varlamov and Berra already got a contract for the next season, while you are still RFA. Do you want to stay in Colorado? What's in your future?

Of course, I love everything about Colorado and my priority is to stay there. The contract things are kinda out of my hands and I can't really worry about that. What I have to worry about is to get ready for the next season.

If you are staying in Denver, we will see you and Reto Berra battling for the backup spot during the October camp. Are you ready?
It's just the way it has to be in the NHL, beat someone out for a spot. It's going to be a battle. I love Reto and we know it's gonna be a friendly competition even if obviously we both want to be there. It's out of our hands in terms of decision making, we can just give everything we have and see what happens.

Reto is here in Verbier with you. What is your relationship with him?
I love Reto, he is such a good guy. He has been nice with me since I met him and when we were playing together in Colorado he has been really supportive. We get along very well.

Monsters are no longer the Avalanche affiliate, now the new farm team are the San Antonio Rampage. How does this work for you players, they basically tell you “Hey guys, you have to move to Texas!” and that's it?
The AHL is always changing. I passed my first three years in Cleveland and now we are in San Antonio, but who knows what could happen in three years from now... We adapt really quick as players, we know things are like this in the AHL so we don't mind too much. We played against San Antonio so we know the city which is really beautiful. It shouldn't be a tough transition at all.