Ticket seller website Ticketmaster.com has revealed a logo for the Stadium Series game between Colorado Avalanche and Detroit Red Wings.

It is not confirmed if this logo is official as there have not been any reports by the Colorado Avalanche on it, but Ticketmaster.com is already using it next to a site where they will sell tickets for this event in a near future.

Click here to visit Ticketmaster's website where we found a logo. It is not available in better quality at the present. You can compare it with recently introduced official logo of the Stadium Series game in Minnesota: 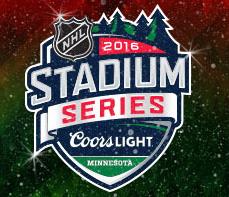