Eurolanche Fan Club did an interview with a new addition of the Colorado Avalanche.

Anton Lindholm was picked by the Colorado Avalanche at 2014 NHL Entry draft of the 144th place overall in the fifth round. He signed entry-level three year contract with the Avalanche recently that makes him one of few higher picks who has signed an NHL contract. Lindholm name is connected with a Swedish city of Skellefteå. He was born and spent entire career there. He played for Skellefteå AIK in different age categories including top elite Swedish league. Six games played for two different lower-league teams on a loan are only exception for Anton.

Skellefteå AIK appeared in three consecutive finals in last three years and Lindholm was a part of the roster. The team could win the elite Swedish league only once of these three opportunities. Lindholm gained seven points in 14 play-offs games in the winning year in 2013/14 season. One year later, he improved by three points in the post-season contest. Anton is very active player within the Swedish national teams, various age categories. This year he played at the World Championship for the first time without a point in three games. 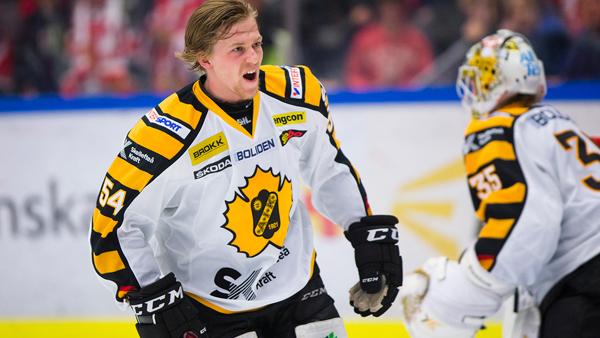 Lindholm is very strong defenseman who can collect points in key moments of the game. He is only 21 years old, but his experience at the Swedish hockey level can’t be compared with many players. His contract with the Avalanche was expected. He will likely start his North America career in San Antonio.

You signed entry-level contract with the Colorado Avalanche last month. Was it something you expected or a little surprise?

It was not something I expected at all, but I had a good feeling after the season and I have had good contact with them during the season.

Have you talked with somebody from the Avalanche yet about your role in the organization for the next season?

We have not talked about what role I will be having, but I have had phone connection and face to face meetings with different people from the organization. Most with David Oliver (Director of player development) and Anton Edlund (Scout).

Are you going to play for the San Antonio Rampage in the AHL? If yes, don't you worry about a big difference between the AHL and European leagues?

What do you think are your chances to make the Avalanche roster in the next season?

I am not sure, I will go to camp and do my best and with the mindset that I am good enough to play there and then we will see how close that will take me.

What will be your goal for the next season?

My first goal will definitely be to play well enough to get a chance in the big league and that is ambitious. Otherwise I want to feel that when the season is over I have become a better player and a player that is one step closer to reach that goal.

You were drafted by the Avs two years ago. Can you describe us what was your cooperation between you and Avs during past two years?

I have had regular phone calls with both David Oliver and Anton Edlund and both of them have visit some of my games both here in Skelleftea and other locations in Sweden. I have been to the development camp both years as well.

You spent your entire career in the Skellefteå AIK so far. What do you think was your best season there and what do you consider your most successful moment?

The season that just ended I consider as my best one in Skelleftea. I feel like I have played on a higher level over longer time than before. My personal most successful moment I think was the GWG in the final game the first year when we won the championship.

You made a debut at the World Championship this year. Was it good experience for you?

It was a great experience for me. It was the first time I have played against players on that level. It made me get a better picture of how good the very good players actually are.

Won't it be hard for you to leave Sweden and its hockey community after so many years there?

It can be hard at first because it will be my first time moving from my hometown. It will be a big change in the social life as well as the hockey. But my girlfriend is moving with me so I will have some stability from home.

Have you talked with some players of the Avalanche/Rampage organization yet? Do you know somebody from there personally?

I don't really know anyone that well.  I have met some of the guys at camp but not much more.

Back in 2014, how do you remember on a day when you were drafted? How did you find out about that?

It was an unbelievable day. I got a phone call from my agent and he just said "Congrats, you just got drafted by Colorado". Rest of the evening was a pretty good evening.

What were your favorite NHL team and player when you were younger?

Since the NHL games are at night here in Sweden I didn't watch much but when I was little I had a poster on the wall with Peter Forsberg in the Avalanche jersey, but if that was just because of Forsberg or the team in whole I am not sure. Haha.

What is your plan for this summer?

The plan for the summer is to get ready to play at my best when the time comes. We have a good group of guys here in Skelleftea over the summer that I will train with so it feels like I have a good chance coming there in the best shape I have ever been in