The Avalanche’s 2017 fourth-round pick is delighted by the Avs and even follows the Eurolanche Fan Club.

There aren’t all too many talented goalies in the Colorado Avalanche system. One of the youngsters who could fight for a roster spot is Czech goaltender Petr Kvaca. In an interview for Eurolanche, the 20-year-old, who currently plays for Ceske Budejovice in the second-tier Czech league, told the Fan Club many interesting things and even said that he follows the Fan Club’s coverage. “I know about Eurolanche and I’m very happy that Colorado has such a strong fan base. That’s one of the things why I’m so proud that the Avalanche drafted me,” says Kvaca, who surprised fans and also betting sites one year ago by a strong performance in the playoffs of the second-tier league. Unfortunately, it wasn't enough and his team hasn't been promoted to the top league since.

You recently had your debut in the Czech Extraliga for Sparta Prague. What was it like?

I have to say that I really enjoyed it. It was a great learning experience – I made a couple of mistakes that I’ll have to work on in order to get better. I even got feedback from the goalie coach, who told me what I did right and what I need to work on. His suggestions are extremely valuable. The entire experience was awesome, although it’s a shame that we lost both games, but that’s hockey. I can build on that and continue to get better. I also believe that Sparta will get back on track and win more games. I view the entire experience as a reward of sorts for my performances with Budejovice.

During your call-up, you met Sami Aittokallio, who was also drafted by Colorado and spent three seasons overseas. Did you talk about his tenure in North America?

Yes, we talked a lot, even about Colorado. He told me how he liked Denver and about his experience while playing in the minors, the guys he played with who made the jump to the NHL… I also liked the practices we had together, because Sami’s a very technically sound goalie and I tried to learn as much from him as I could. It was great and yet another thing why I enjoyed my stint with Sparta so much. 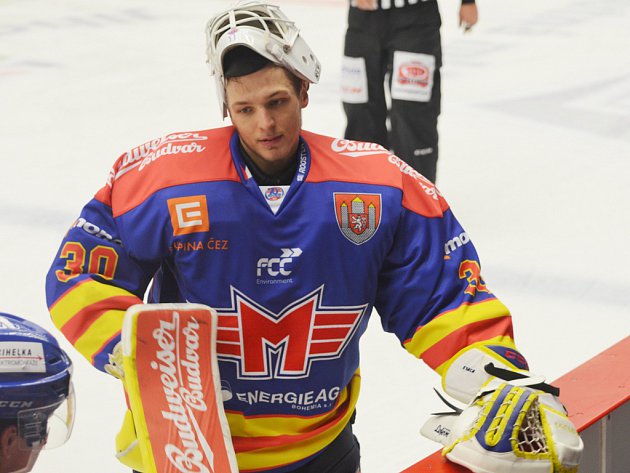 You’ve attended two of the Avalanche’s preseason camps. In what ways did they help you the most?

I was really grateful that I got the chance to attend them and even got to play in one game. For the most part, it helped me to get accustomed to everything, as everything was new to me – the language, the practices both on and off the ice and the way the organization treats its prospects. For example, we interacted with fans a lot. The practices were awesome, I learned tons of new things that I can use in my career. The entire experience opened my eyes and motivated me to work even harder in order to get an invite to next year’s camps. I could also show the Avalanche coaches that I worked on my flaws. I’m eternally grateful that I got to experience the whole thing!

What were the biggest differences between your experience overseas and the things you’re used to back home in the Czech Republic?

During each practice, both on and off the ice, we wore chest straps, which helped the coaches monitor our conditioning. We had a lot of seminars about nutrition and our physique. That’s one of the biggest differences – in North America, everything is talked about individually and in-depth. I received lots of material about how to get stronger and continue to grow. I’m thankful that they made all this available to me. We still keep in touch – they still call and write me, for which I’m really grateful.

You’ve certainly met a number of Avalanche legends during camp. Who made the biggest impression?

I met Joe Sakic while I was out buying breakfast in San Jose prior to a game. He took me by the shoulder and asked me how I was, how I slept that night and told me that he was looking forward to seeing me play in goal. I couldn’t believe what was happening… We kept talking and he asked about the Czech Republic and about my family as well. He even came to me following the game and told me that I played great and that he really liked what he saw. I was taken aback that he’s so interested in me despite the fact that I’m not playing in North America this season. It meant a lot, because he’s one of the best players to ever play in the NHL and the Avs’ current GM. I really admire him for everything he’s achieved and for the way he treated us young guys at camp and his support. It meant a lot that he found to time to chat with me and that I wasn’t just another nameless prospect to him. Him being so friendly and helpful to us left meant a ton and left a great impression.

You’ve also met a lot of talented prospects from the Avalanche organization on the ice. Who do you remember the most?

J.T. Compher, who was our captain during rookie camp. Despite being one of the older guys, he was really helpful with everything. I follow him a lot now and I know that he’s had success and has been putting up decent numbers. In retrospect, it’s awesome to think that I played on the same team with a player, who’s managed to establish himself with the Avalanche. Kudos to him. He’s a terrific hockey player and I really hope that I’ll get to play with him again someday.

Did you have the opportunity to meet someone from the current Avalanche roster?

Before we flew to San Jose, I met several first team players. I met Jonathan Bernier and Semyon Varlamov and we shook hands. Later, we kept seeing each other in the weight room and on the ice. Both made an impression on me for the way they train – they constantly push themselves and train a lot individually. I was surprised by how they focus on the details. Sometimes the goalie coach got so preoccupied with them because they kept working on the littlest of details. The conditioning coach also did and talked about everything with each player, a little too much at times in my opinion, but it was great nonetheless!

Of course, I always watch their games! I currently have a harder training regime, meaning that I have to sleep well at night, which means that I can’t wake up at night to watch the games live, but I always look up the results and watch game recaps in the morning. When their games are played at a more reasonable time, I watch them every time. For example, when they played two games in Sweden, which were played at 8pm CET. I have to say that the Avalanche had a great start to the season and despite some losses, I still believe that they have a very talented team, which will only get better in the future.

Wasn’t you playing in the second-tier Czech league a problem for the Avalanche brass?

This was out of my hands and management talked about it with my agent instead. The important thing for them was that I’d play as many games as I could. Right now, my top priority is playing for Motor. I’m the kind of person who’s focused on the present, who deals with things as they happen and who focuses as far as tomorrow’s practice. Together with goalie coach Standa Hrubec, we try to make the practices as productive as possible, so they could help me improve on a daily basis. The future can be only influenced by the things one does today.

I noticed that you and goalie coaches Roman Turek and Stanislav Hrubec talked with an English-speaking man, who looked like a scout, after one of Motor’s recent games…

Yes, we spoke with the goalie coach of the Avs’ AHL affiliate, who came over to watch me play and who’ll maybe come back in the near future. They always give me a heads-up when they’ll come in advance. I’m also keep in touch with Colorado’s European scout via my agent.

Do you know Eurolanche, the European fan club of the Colorado Avalanche?

I know that they exist and that Colorado has the biggest European fan club. I also know that they’ve recently been to Sweden for the Avs’ double-header against Ottawa. I really like their dedication and enthusiasm, as well as the fact that Colorado has such a strong fan base in Europe. I even know that they published a book, which was also published in English. These are one of the things why I’m so proud that I was drafted by the Avalanche. It’s awesome to be part of the same organization as Czech greats like Milan Hejduk and Venca Nedorost once were.

Speaking of Vaclav Nedorost, you’re both currently playing for the same team. Did you by chance talk about Colorado?

Venca also follows the NHL and Colorado, which is why we always talk about their games. At the beginning of the season, we spoke about Colorado and about his tenure with the team. While at camp in Denver, I asked if anyone remembers him, but apparently even the equipment managers are new to the team, which is sadly why no one remembers him.

This interview has been written by Matej Mayer exclusively for Eurolanche and translated by Michal Hezely.