Eurolanche fanclub did not make interviews only with Jan Hejda or Milan Hejduk, but also with former NHL and Av enforcer David Koci in Prague, Czech Republic.

NHL was shocked by deaths of tough guys in the last year. Do you think the fights had an influence on that?

I do not think so. Fights need to be in the sport. It is hard job, but well rewarded. Of course it could have a little influence, but I do not think the hit to the head in the fights is something different than hit to the head in the body checks. Fights should stay in the hockey. It is not about aggression or hatred. It is about sport. We do not feel anger to each other. I like aggressiveness in the sport. Hockey is aggressive and fast game. Fights release emotions.

Have you ever been forced to fight?

I have not. It has been my decision all the time. I tried to sense the energy of the game and react.

When have you become the enforcer and when have you move from the defense position on the forward?

I become fighter in the first years of the minors. I realized I am huge and strong and I should also make use of that in the game, fight occasionally.

I had started to fight, everything was good. But I suffered knee injury and it had stopped my hockey development. When I was back, they moved me on the forward position, because they just wanted fights from me. I did not care about it, because I wanted to play in the NHL and I knew this could be that way how to get there. I worked out on myself like a hockey player too.

You started like a figure skater when you were kid.

Yes, when I was 4 I started like a figure skater. Then I looked on hockey players all the time and I wanted to join them. When my grandfather saw I did not pay attention and I like hockey more, he decided to sign in me to hockey.

How it was in the juniors? You spent long years overseas as a young player.

I liked it there. I was happy for being there. When you are young, you want to go into the world. You do not like it much at home. It got me freedom. I even did not want to come back to home.

You were waiting for the NHL for the long time. Were you not disappointed?

I was not. I was supposed to enter NHL after first three years in the minors. But I suffered injuries, which slowed me, so I was not able to go there.

Tampa Bay sent you on the waivers. St. Louis chose you, but after few games you were back in Tampa. Was it hard for you?

My talent is not for example Hejduk´s. I could not choose teams. I try to work out hard. My target is the entire league.

You often played less than two minutes per game in your last season for Colorado Avalanche. Were not you angry?

Some coaches give to this kind of players more ice-time, some less. It is the strategy of the coach. I was disappointed of course. When I am looking back, it was wrong it made me disappointed. I should be thankful for being there… But I have ever been. I was angry, but it forced me to work out more and more. I was happy to be there. When you just practice with the team, you can get better.

You played on the defensive position in that time. 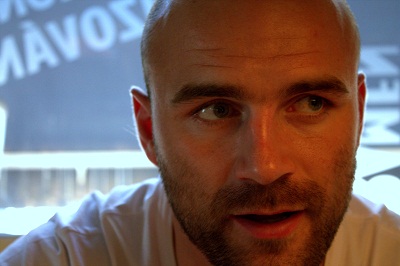 When the Avs management announced you they had no more interest in you?

In the summer. They offered me two-way contract. I did not want it because I knew I would go in the AHL. I did not want to go there. I wanted to continue in other direction. I went to Winnipeg. I did not make exam due unlucky issue. I could not be on the ice for the first five days due some health checks. Finally they let me go there, but I lost everything. So I came back to Czech Republic, when I am experiencing something new. Last year was interesting for me, I am thankful for it.

What did you surprise in the Avalanche organization?

I was surprised by the humanity of the management and by the identity which they were trying to build inside the team. All people behave with respect to each other. It was like one big family, what you could not see in many teams. It is a business, but it was about family there. It is very good team from this point.

Will you come back to the NHL sometimes?

Hard to say. It is God´s will. It is not up on me. God have opened me way every time. I have had luck too. If I should come back, something from the up has to come. I tried to work hard as possible is.

We have two memories on you. First is the hit on Mike Green…

I have never wanted to injure player, I want to make good job for my team. I was sad what happened. I tried to hit him clearly. He turned with his back… I did not want to hurt him.

… and the second is a fight with Zdeno Chara. Some media speculated he knew you were injured.

I think he did not know it. It happened like it happened.

You did not care you were injured.

You gained 42 penalty minutes in you first NHL game. Did you plan it?

I did not, but I wanted to be in the NHL. Josh Gratton gave me KO in one fight and then I was mad. I started to hit everybody.

You scored three times in the NHL. What goal do you like most?

Maybe the first one in Montreal. Mecca of the hockey. It was great.

How was your first season for Sparta Prague?

Very successful. I did not know what I was going to experience. Everything was good. But I finished season in the playoffs due the injury. I could not play more games.

*David spent his first post-NHL season in Prague, Czech Republic playing for the local successful team. He played in defense there. Management liked him and decided to re-sign him.

With which defenseman do you like to play most?

It does not matter. I am professional. I like all players.

No. I fight only twice.

* In all European hockey leagues you get 5 minutes and misconduct penalty for fighting. So the fights does not worth.

Do not you miss it?

Fights not at all. I am missing the professionalism around the hockey. You have more freedom in the NHL as a player.

What do you want to do after retirement?

I would like to coach junior players or adults. I ogle professionalism in the NHL. It could support team´s performance. I would stay here or go overseas. Or I would like to be European scout for some NHL team.

I like to work out, hockey and take care of myself. I like coffee with my friends.