Eurolanche did an interview with former Avalanche forward Ville Nieminen, who currently plays for Tappara Tampere in SM-Liiga.

Ville Nieminen was born on the 6th of April, 1977 in Tampere, Finland. He began his hockey career playing for the local team Tappara. He impressed NHL scouts during the 1996-97 season, in which he played the whole season for Tappara and was one of the best players at the World Juniors.

Nieminen was drafted in 1997 by the Colorado Avalanche with the 78th overall pick. During his first three years in North America he was gaining experience in AHL, playing for the Hershey Bears. During the 2000-01 season, he was already part of the first team and won the Stanley Cup with the Avs.

Nieminen’s jersey from the final match against New Jersey Devils in the Finnish Hockey Hall of Fame.

Nieminen’s ties to Denver aren’t just hockey related. He has a son that was born there and he promised him a trip to the Mile High City. He also asked about Milan Hejduk and what’s he been up to – he was told that he’s most likely going to remain in Denver, but he wasn’t offered a contract from the Avs, which is the reason he’s not playing.

Halfway through the following season, Nieminen was traded to Pittsburgh. After a season with the Penguins, he changed teams. He played a few games for Chicago and was traded to Calgary. During the lockout, Nieminen played in his home town for Tappara Tampere. He came back to the NHL after the lockout, dressing for the NY Rangers. In the middle of the season he was traded again, this time to San Jose. The following season, he swaped uniforms again and became part of the St. Louis Blues organization.  After a season with the Blues, he decided to come back to Europe.

However, he didn’t choose to play in the Finnish league and opted to play in Sweden instead, signing with Malmö. He played the following two seasons in the Finnish Liiga for Tappara. During the 2010-11 season, he played for Sibir Novosibirsk in the Russian KHL. The next season he also played for Niznekamsk and Latvian team Dinamo Riga, both in the KHL, but he finished the season with the Sweidsh side Orebro. In 2012-13, Nieminen started playing for Tappara. He’s serving as team captain this season.

How do you evaluate the last season and the current one?

Well, I think last season was really good. I had a chance to play with Florida‘s future star Aleksander Barkov on the same line for the whole season. I think we benefited from eachother, helped eachother to be better hockey players. In the current season, I obviously have a big role, I am the captain. It‘s more like the leader off the ice and in the locker room and I am playing on the third line, a smaller role. Obviously, effort and leadership is right there. It looks like scoring isn‘t, but we are third in the league, which is really good and that’s the only thing that matters right now.

Nieminen (in the middle) listening to the coach on the training.

What are your plans for the future?

I think I’m going to start coaching and doing hockey TV, look for a broadcasting job.

What about your health?

Well, I am pretty much healthy. There are still some nagging injuries, soreness, tightness. My feels like it’s in its fifties, but I feel like I’m in my twenties.

Do you follow the Avalanche this season? What do you think about their current success?

Ville Nieminen on the training.

What’s the key factor for their success? Is it Patrick Roy?

Well, it‘s a young team. They needed to get more confident and to be excited to play each and every day. At the same time, Patrick brings leadership to the locker room. So this three things.

Who’s going to win the Stanley Cup this year? Any guesses?

When they’re ready and they aren’t ready yet. They’re still young and the biggest thing is to turn them into a play-off team and to move forward step by step, get back to the top six in the league. You can start to think about winning the finals after that. 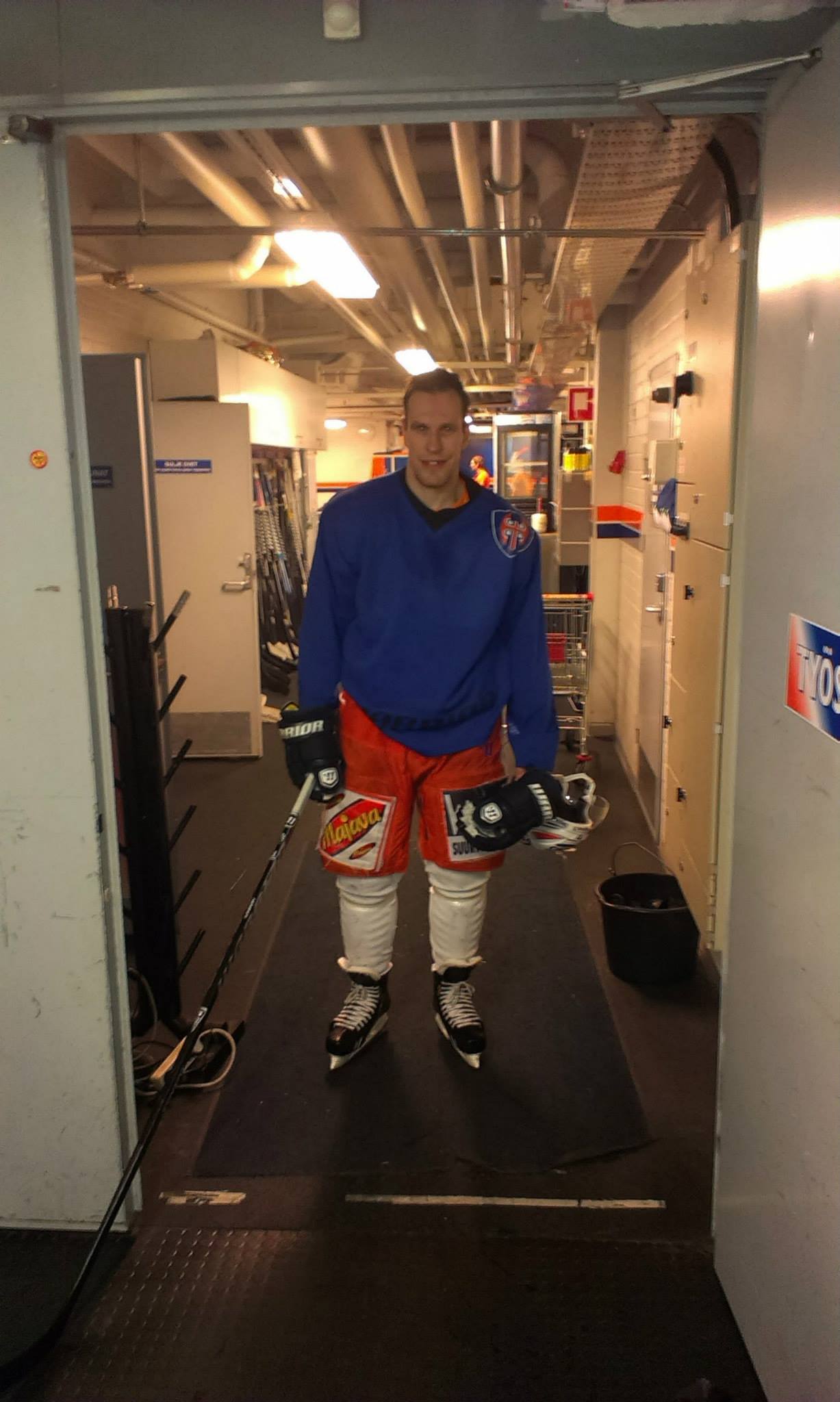 And a picture only for Eurolanche in the locker room of Tappara.