The recent rumors from Russia indicate that Alexander Radulov may become a player of the Colorado Avalanche.

Russian website championat.com published next rumor involving Alexander Radulov. Now, it says that Patrick Roy himself called to Radulov and asked him to come to Denver. Roy served as head coach in the junior league of QMJHL for the Quebec Remparts when Radulov was playing there. They both gained a lot of success; especially Radulov won some individual trophies and main one – Memorial Cup. 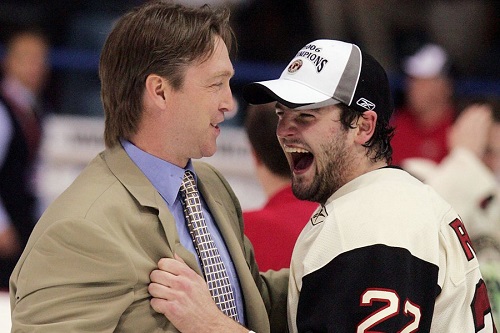 Roy said in the past that he has interest in bring Radulov back from KHL to NHL. Coach also realizes Radulov's complicated character, but believes he could play and behave like any other player under his bench. Radulov wants to come back to North America and won the Stanley Cup, the website reported.

Sole problem of this rumor is a valid contract between Radulov and CSKA Moscow of the KHL for one more season. Radulov will be a free agent in summer of 2016. If both Avalanche and CSKA didn't reach some special agreement, the forward would not be available sooner that in the next year.

Radulov with Gagarin Cup - the main trophy of the KHL.

Radulov spent two seasons in NHL playing for Nashville Predators. In 2008, he left the team for KHL in spite of his contract was valid for one more year (thus it wouldn't be first time, if Radulov would violate his contract). He came back to Nashville almost four years later for final nine games of the regular season and playoffs. After this short stint, he came back to KHL again where he has become one of the MVP players and also won Gagarin Cup. His behaviour is well-known as for example he was suspended for one playoffs game due breaking team curfew – he was spotted at night bar just hours ahead of the game.