Back in time: Invasion VIII

Robert Heppekausen was one of two first Avalanche fans from Germany who traveled to Denver with the Eurolanche. He looked back at this experience at the Eurolanche Invasion VIII in the following recap.

So you want to know if all the time and money you would have to spend to be part of a Eurolanche Invasion is worth it? You wonder, if you should just do it and go to Denver with a bunch of crazy Avalanche fans from all over Europe to watch your favorite hockey team? In short: Yes, yes and yes, absolutely. For the longer version, just keep reading.

I’ve never been to Denver and I only saw the Avs live once in New York in 2009. They are my favorite NHL team, but I am also a bit of an ice hockey version of a groundhopper, so I am always on the lookout for those special, once-in-a-lifetime venues to watch some hockey in. When the Stadium Series Game was announced for Denver, I knew I had to be there and immediately signed up for the Eurolanche Invasion VIII. After the orientation meeting in Prague, Czech Republic and all the stories that were told by the guys, who had already been to Denver, my excitement grew and I was really looking forward to the trip, even more than before. 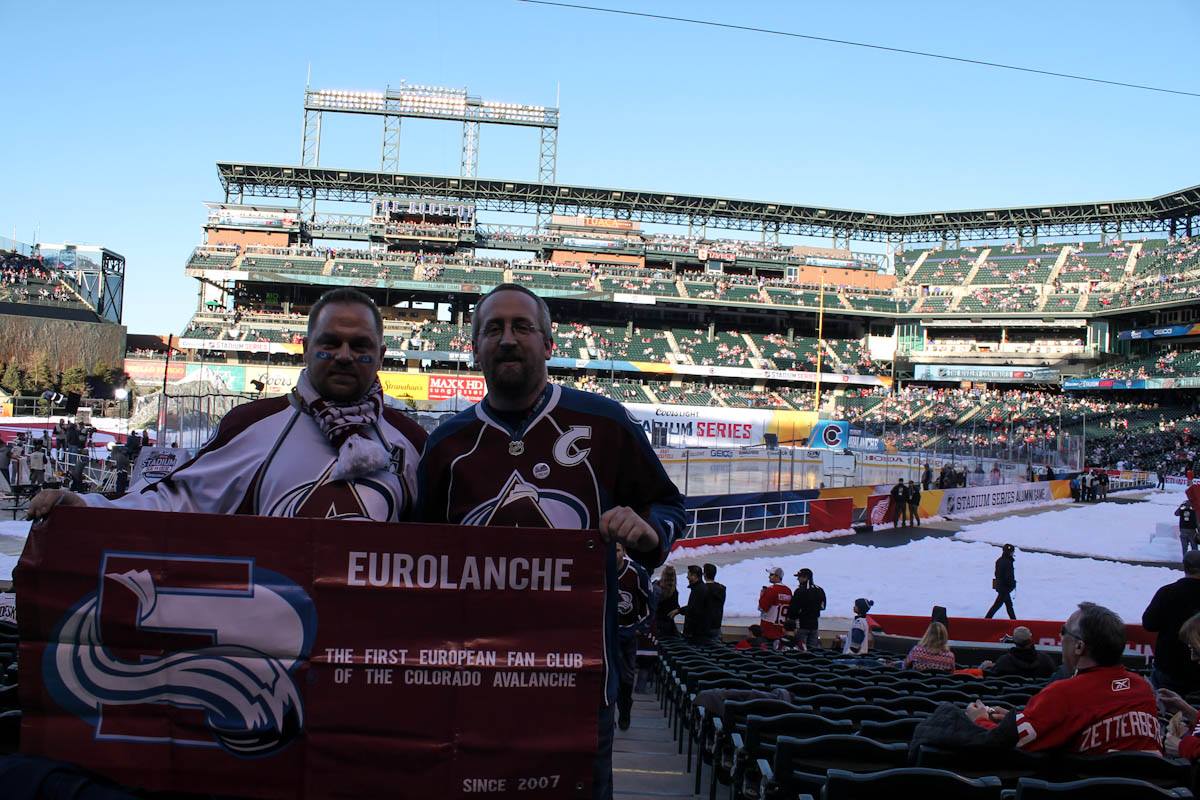 The Author of this story is Robert Heppekausen, who is pictured on the right on this photo.

Since the whole group started the trip from Vienna, Austria, me and Boris, the other German participating, took a flight from Düsseldorf to Vienna the day before and had a lengthy walk through the Austrian capital. After a good night’s sleep, we met all the other members from Slovakia, the Czech Republic and Austria at the airport and got on board of the plane to Denver via London. After almost a day of traveling, we finally landed in Denver and the first thing you will notice when looking out of the airport windows is the beautiful view of the Rocky Mountains. You will see them a lot during your trip, but you will never get enough. We picked up our rental car and went straight to the hotel to drop off our luggage. We only had about an hour of free time, since the Avalanche played the Sharks on the same evening of our arrival and we had a full schedule ahead of us.

The next stop was Pepsi Center, my first time visiting the home of the Avalanche. It was amazing. The first thing one recognizes when walking inside the arena is the gigantic jumbotron (called the Pepsi Vision), which also captured the whole group when we were standing in the first row to watch the Avalanche warm up. During the first intermission, we were on the Pepsi Vision again, as Eurolanche got coverage from the Pepsi Vision crew, with an interview for everybody inside the arena to see. During the second intermission, we were interviewed by Bill Price, the editor-in-chief of NHL.com, so there was really almost no time to settle down. Also, the game went to overtime and a shootout, in which the Avs finally won. A good start for the trip, but sleep was well needed after a very long day.

The next day started with another trip to Pepsi Center, more specifically the team store, where everybody spent lots of money on team merchandise, as some members also did at the Denver Broncos store later on. We then went to the hotel, where the players for the Alumni Game stayed to get some autographs. We did this several times during the first days and got signatures and pictures together with players like Shjon Podein, Mike Ricci, Adam Foote, Milan Hejduk or Peter Forsberg. Some of us went to the 16th Street Mall, the big shopping street in Downtown Denver, which was also a very popular destination during the course of the whole Invasion, as was the Colorado Mills Mall. A quick tip: Pack really light for the flight to Denver; your luggage will be full for the trip back home anyway.

I personally got my shopping fix the next day at the Castle Rock Outlets, which is a bit outside of Denver, and was pretty much done with shopping after that. Well, except for lots of Avalanche souvenirs of course. After that, we started our first trip to Coors Field, Denver’s baseball stadium, where the Rockies usually play, but not on this night. It was time to dive into the past and watch the Alumni Game between the Colorado Avalanche and the hated Detroit Red Wings. It was just awesome to see all those legends play and it was a really good hockey game too. It wasn’t just a show, as the really competitive.

The next day was the big day of the Stadium Series game and there was much more media attention to come for the Invasion members. NBC’s Jeremy Roenick came to our row during the second period and did an interview with us that was broadcasted on national television. This was pretty special for me, since he played a few games in my hometown during the 94’ lockout. He still knew a few words in German and with a selfie and signature later, I was back in my seat to see the Avs lose this big game. Quite a bummer, but we hadn’t had much time to think about it, we had to go to Las Vegas immediately after the game.

It took about a 14 hour-drive before we arrived in the morning in beautiful Vegas, where the sun was shining and the temperature was 25 degrees Celsius. We stayed there for two days, some of us went to some shows, like David Copperfield etc.; everybody walked down the Las Vegas Strip at least once and went inside some of the world’s most famous casinos like the Caesars Palace, which I personally liked best. Vegas is a very unique place - the city inside the desert is fascinating and worth a trip, although I wouldn’t spend weeks there, as just a few days seemed fine. After taking a group picture at the „Welcome to fabulous Las Vegas“ sign, we started our drive back to Denver, which took almost two days. We had several stops along the way to visit the Hoover Dam, eat some World Famous Hot Dogs, take in the breathtaking views of the Grand Canyon, see where the four states of Utah, Arizona, New Mexico and Colorado meet at Four Corners Monument and walk through Mesa Verde National Park.

Back in Denver, there were still lots of things to do besides watching all the Avalanche games during our trip. We visited Stranahan‘s, the distillery where the only Colorado produced whiskey is made, had a tour through the Pepsi Center and Sports Authority Field, home of the Denver Broncos, the new Super Bowl champions. We also did an hour-long snowmobile tour through the Rocky Mountains, which I highly recommend. Some of us visited the NBA’s Denver Nuggets. I was really happy to watch them play the Dallas Mavericks, who had German basketball legend Dirk Nowitzki their lineup. Others were curious enough to go see a Colorado Mammoth game, the local lacrosse team.

As I said earlier, I am an „icehopper“, so I had to see some other hockey games in Denver, too. I went to a game of the Denver Pioneers, the university team, which later made it all the way to the NCAA Frozen Four tournament and also watched a game of the ECHL’s Colorado Eagles. Both teams are not that far away and offer quite different experiences, with the Pioneers playing in a really great arena and the Eagles playing some very „raw“ and fun hockey.

Meeting players may also be a big reason for you to go to Denver, but I have to say it‘s not that easy at all. The Eurolanche Invasion staff really did a lot to make this happen, but in my opinion, the Avalanche themselves could be a bit more supportive. We got post-game passes for two games - they allow you to wait down in the catacombs for the players and try to get signatures and pictures, but it all depends on their willingness to do so and not every player likes it that much. With some resilience, it’s still possible to get quite a few. We also went to some practices in the Avs practice arena and waited on players afterwards. Like before, it took some time and it’s up to the players to stop their cars and talk to the fans. There are some really great guys on the team, who will stop, get out of their car and fulfill every wish, while others are harder to get.

Sometimes luck helps a bit too: during the game against Florida, former Av Jan Hejda sat a row behind us, so we talked with him a bit, got some pictures and signatures, too. Since he is a friend of Eurolanche, we were able to meet him later during the Invasion together with Milan Hejduk in the practice arena. I can’t tell you much more about this, since I was sick on that day and didn’t go, but I was told it was a fun meeting and they are good guys. Since they know and really appreciate Eurolanche, the meeting with them should be possible during all Invasions. We got really lucky on one of our visits to the Pepsi Center Store: Coach Patrick Roy was there too, with his family and he took some time for pictures and autographs, which is quite rare from what I’ve heard.

To sum the whole Invasion up, it was a great trip, well organized, with lots of new experiences. The two weeks flew by really fast – almost too fast to be honest. You will meet a lot of new people, not only the other Invasion members, but also the people former Invasions participants made friends with and might become friends with them, too. You will never forget this first trip to Denver and you will take lots of things with you. And then, when you go back to watch Avs games on TV at home in Europe, you will have a different perspective: you will know what the atmosphere feels like inside the Pepsi Center, what happens when certain songs are being played and during the intermissions. It will feel a bit like home for you.

So to get back to those questions up top: It’s absolutely worth it and you should really do it!

Back in time: Eurolanche Invasion VII

Back in time: Eurolanche Invasion VI