Back in 2014, Maximilian Pajpach was the lone bright spot in what was a disappointing year for Slovak hockey. Chosen 174th overall by the Colorado Avalanche, Pajpach was the only Slovak-born player to be drafted by an NHL team that year. As a European prospect, he had a four-year window to sign an entry-level contract, but a serious knee injury during a game for the Slovak national team destroyed his dream of making it to the best league in the world as soon as possible.

Nowadays, the 22-year-old is fighting to get his career back on track in the second-tier league back home in Slovakia. Although it’s no easy task, Pajpach is fully committed to making his dream of playing in the NHL come true one day. “I was close once already, why couldn’t it happen again? As long as I’m playing, I’ll keep fighting to make it to the NHL,” said the young goalie in an exclusive interview for Eurolanche.

You were drafted by the Colorado Avalanche in 2014. You were the only Slovak player to be chosen that year, something which hasn’t occurred since the dissolution of Czechoslovakia, but your chances on earning an entry-level contract are slowly dwindling. What happened during the past four years?

It was a difficult time for me. I was slowed down by a serious injury, which forced me to miss more than an entire season.

If I remember correctly, the injury you mentioned kept you from playing for Tappara Tampere’s junior team the season right after the draft. You viewed the chance to play in Finland as a stepping-stone to the NHL. How did the injury occur?

As I’ve already said, the injury was hands down the worst thing that could’ve happened. It could’ve been a great first season if not for the injury, which would’ve helped my chances of earning an entry-level deal. I injured myself while playing for Slovakia prior to the U18 World Championship. Everything went downhill ever since that faithful game against Switzerland.

According to our sources, you had surgery back home in Slovakia, which, as it turned out, significantly affected your current situation. Can you tell us more about it?

It’s tough to say if it was really caused by my first surgery. Nonetheless, I had to have two more, meaning that the first one probably didn’t solve much. I couldn’t have possibly known how it would turn out prior to undergoing my first surgery, which is why I ultimately decided for it. All in all, I had to have it, because I couldn’t play with my knee in the state it was in.

You didn’t get a chance to play senior hockey in Finland, which is why you opted to sign for Poprad last season in hopes of getting back on track. Unfortunately, you only played nine games and later questioned your decision to go back home. In hindsight, who should’ve you had signed with instead?

I had offers from teams from the Czech top and second-tier league, which I probably should’ve chosen instead. But you make decisions like this all the time. Who knows, maybe playing in the Czech Republic would’ve been better, but you can’t change the past, which is why I don’t think about it all too much. 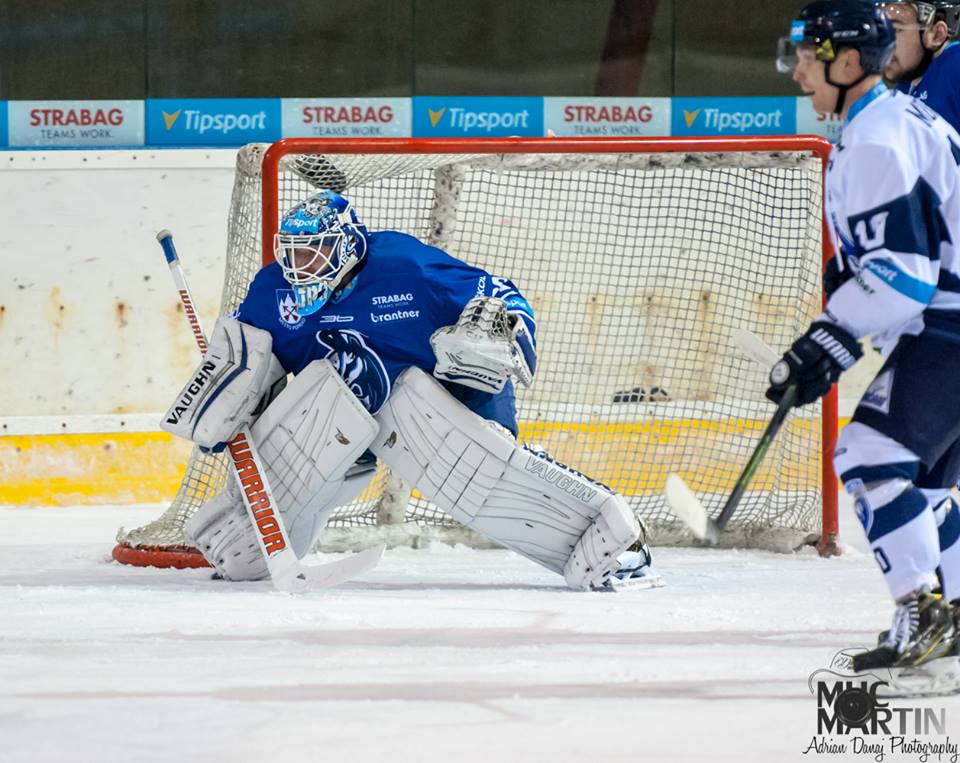 You also played five games for MHC Martin’s ‘B’ team, the worst team in the Slovak second-tier league last season. You had a GAA of 7.05, which had to be tough mentally.

Stats often don’t tell the whole truth. The GAA was mainly due to the fact that my teammates allowed our opponents to have 20 or 25 shots on goal in a single period, which makes it almost impossible to allow two or three goals per game. Naturally, your stats take a hit when your team plays like that.

At the beginning of the current season, you chose to stay in the Slovak second-tier league, signing for HK Michalovce. After seven games, you changed teams yet again, going to Spisska Nova Ves this time. What was the problem this time?

I wouldn’t necessarily call it a problem, but following a coaching change in Michalovce, I decided to return to Poprad and to play for their minor league affiliate in Spisska Nova Ves. I thought that I would have a better opportunity to play as much as I could than I would’ve gotten under Michalovce’s new head coach, which ultimately proved to be right.

You viewed your decision to play in Slovakia’s second-tier league as kind of a career restart. How do you think it’s going so far?

I think it’s going pretty good right now. I already played about 20 games (7 GP for Michalovce, 22 GP for Spisska Nova Ves with a .898 SVS% and a 3.72 GAA), which is more than I’ve played the entire past season (18 games played). That’s why I think that it’s starting to get better and that I’m slowly getting back on track.

In the past, Jan Laco managed to make it to the World Championship, and later to the KHL, from the same league you’re currently playing in. Swedish goalie Viktor Fasth even managed to work his way from Sweden’s fourth-highest league all the way to the NHL. Although both cases sure are an inspiration, they’re very rare exceptions more than anything else. Did you also consider the idea of retiring should no long-term opportunity in an elite league present itself?

Both goalies are one of the reasons I still play, because I they prove that anything can happen. The most important thing is that I love hockey and that I really enjoy playing, which is why I don’t think about retiring as long as hockey remains my top priority.

How far away is Maximilian Pajpach from the NHL? Realistically, do you see a chance of playing there one day?

I came close once already, so why couldn’t it happen again? As long as I’m playing, I’ll keep fighting to make it to the NHL. I was never without a goal and I’ll never allow myself to just go through the motions on the ice without a clear goal in mind.

How close were you to getting a chance in the NHL after the draft?

Tough to say. Following the draft, the Avalanche and I agreed that I will go to Finland, at least for a year, as I’ve had a three-year contract with Tappara. Right when I began to play again, the team’s goalie coach flew over to watch me and Sami [Aittokallio] in action, meaning that there certainly was interest from their side. I don’t think he would’ve flown overseas otherwise.

In what way did the Avalanche development camps you took part in help you the most?

I could see what real hockey looks like and how real superstars behave and act like. It really gave everything a new perspective, as I can compare what I saw there to what I’m experiencing here in Europe. I also learned a lot not only from the coaches, but from the goalies as well. Overall, it was a great experience.

What’s the difference between NHL stars and stars in Europe then?

I would like to say that I don’t want to say that everyone necessarily has to be the same, but in general, I feel like NHL players, who have achieved a lot, are way more humble, I’d even say more human than some European superstars and top players. But then again, everyone’s different and it really isn’t just about where you play, but more about the kind of person you are.

While in Denver, you’ve met fellow goalie Roman Will, who played one game for the Avalanche and currently plays in Liberec in the Czech Republic. I had the feeling you two got along really well. Do you still keep in touch?

Not as much as we used to, but we still text each other from time to time. As you’ve mentioned, we’re good friends. I follow Roman and I’m always happy when he has a good game. In case he reads this, Hi, Feško! (laughs)

Would you even consider the path Roman took? Some European players don’t like playing in the minors and rather choose to go back ‘home’, less frequent travel also being a factor. Will had to wait two years before getting a shot in the NHL, and after he got it, he still decided to return to his native country.

You never know until you try. I’d surely be on board, because even in the ECHL, a draftee is closer to the NHL than he would be in most European leagues. I wouldn’t hesitate. I’m still young and I don’t shy away from challenges.

Where would you like to see yourself five years from now? What’s your potential?

I’d like to see myself in an elite league, either in Europe or in North America, doesn’t really matter as long as I can do what makes me happy – to play and stop pucks. I think that I have what it takes. If I keep working hard and being patient, I believe that the opportunity will come.

Imagine your agent told you that you had offers from every team in the NHL. Where would you like to play the most?

Both the Avalanche and the Blues have been my favorite teams growing up, so it would be one of them, but I would obviously rather choose the Avs. I really liked Colorado and I’m also very grateful that they were the ones that deemed me good enough to draft me.

Thank you very much for the exhausting interview and I’d like to wish you all the best in the future.

This interview has been written by Patrik Czepiec and translated by Michal Hezely.