Eurolanche Fan Club interviewed Croatian forward prior a start of the camp. He has important message to all Avalanche fans.

Borna Rendulic is about to enter his second season in the Colorado Avalanche. In his first year, he has become the first NHL player raised in Croatia. He scored his first NHL goal and added one assist in total of 11 games. He spent rest of the season in AHL or with healing as he was injured. This year will be second half of his two-year contract. Young and decent player who has had no problem to talk with fans anytime would like to become a standard NHL player and stay in Denver. Seeing so many names and young guns on the current roster, it definitely won’t be easy for him.

How has your life changed after the first season in the NHL/AHL?

My life changed a lot when I came to the US to play in the NHL and the AHL. I could say that I even started a new life, definitely a new chapter in my career, which I want to keep opened for a long time. Absolutely, my dream came through and suddenly, nothing was same as before. I had to get used to a new environment, new and more professional rules than in Europe, new society, yet also new life on a highest level, luxury life in the NHL, best hotels and conditions for training and playing, great fans and similar to that. It was quite a change, but I'm satisfied how I handled it, because I learned how to be more professional, how to play better, to be more mature both in life and in my game and most importantly to manage to be good in the best hockey leagues on Earth

As a hockey player, what new did you learn after that season?

As a hockey player, I learned how to be humble, how to have better teamwork in my game and I really think that I improved myself as a player bodily, especially my defensive game. I definitely started to think on my team and play more for the team, not just for myself, and now I'm sure that is the right path and that I have to play just like I'm playing and contributing my team right now.

What were you doing last months of a break?

In the last months of a summer break I have been training of course, with my personal trainer Jurica Frankovic, who has also lately become a masseur and physio in all Slovenian National Teams. I work very quality with him for years now, and he is one of the people who made me a player which I am right now, who got me to the NHL and helped me with my career. Ever since I came back on "vacation" in Croatia, after maybe week or so I started with trainings with my trainer and I really worked my ass of this summer to be as best as I can before the camp and new NHL season.

Were you in a contact with someone from the Avalanche?

I am always in contact with several people from the club and with a lot of players. I really appreciate their advices and listen to them because I know they are benevolent and that I can profit from them, especially in training process. So, I really endeavor to stay in touch with as much people from the franchise as I can and to talk with them all the time, because I know it's a big incentive and help.

Did you read news about new players on the team? What do you think about them? Who may become different-maker?

Yeah, of course I read news about new players on the team, since I follow the club and its news all the time. I think they are all great players, that's for sure because they wouldn't have been where they are right now if they are not great players. I like the Russians very much, but I think Francois Beauchemin is a very good and experienced D-man, so he could be a different-maker.

On what moment of the past summer you will never forget?

I won't definitely never forget my training days with Anze Kopitar at his camp which I'm very proud of and grateful for. That was absolutely the highlight of my summer this year 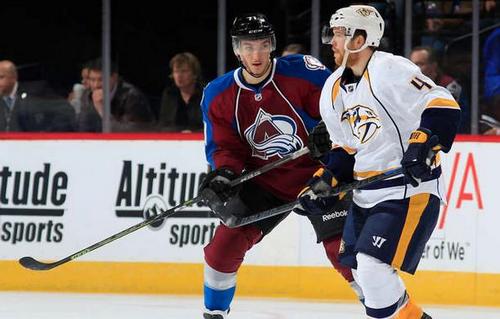 Why do you think you will be a better player like in the last season?

Well, I think I'm going to be a better player this year because I am more mature now than I've been when I first came to the NHL. Furthermore, I am better player now, in best shape in my whole life and career and most importantly - I got used to the NHL last season, so now I know what to expect, nothing can surprise me, I know how to react, how to behave and I am not impressed with anything anymore, like I was last season. I am definitely ready for everything right now.

You were getting know the NHL last year. What is your new goal for new year?

My goal for the new season is to become a standard player in the NHL for the Avalanche and hopefully to get a new contract so I could stay there. Also, I want to improve my game even more, to become better player as well and to score goals - because that are the things that make me most happy in my life. Therefore, those will be my aims in the months that are coming.

What are you doing these days in Denver?

Well, these days while I'm in Denver I am trying to get myself as much relaxed as I can, to be focused on trainings and tests and to physically and mentally have as much rest as I can so I could be fresh for the camp and for the start of the new season.

What is your message to all the Avalanche fans that cannot wait for the beginning of new season?
My message for all Avalanche fans worldwide is to stay focused this year, to cheer for us and to have faith in us, even if we start the season bad or have some flaws and "black holes" in our game eventually. Stay positive, enjoy the game and hopefully we'll make you all proud and happy! :) #IsItOctoberYet