Hejduk: I’ll return to the Avs

The Eurolanche fan club has made another exclusive interview. This time, the members that took part in the Eurolanche Invasion VII met with the Czech legend.

I’m happy and I’m doing well. I’m living the family life now, I get to spend a lot of time with them. I’m also coaching a youth team.

Yeah, everyone was telling me that I would get bored, but that’s not the case. It’s a little strange, but I don’t really have so much free time. Something’s happening all the time.

Do you coach your sons?

Yes, they’re playing for an under-11 team. It’s a Colorado selection team. I travel a lot. We go on tournaments every month. We aren’t part of a league, we just play exhibitions. We’re going to face Buffalo, New Jersey and Chicago next. I’m an assistant at the club and it’s really interesting. One of my boys is a forward and the other one’s a defenseman. They have a long road ahead of them.

Are you preparing for a job with Colorado?

Maybe in the future, depends on the kind of job I’d get. I don’t really want to travel at the moment. There might be an option to work as a scout, if I’d have interest, but that includes a lot of travelling and I don’t want to be without my family.

Weren’t you a little disappointed about your end in the NHL? 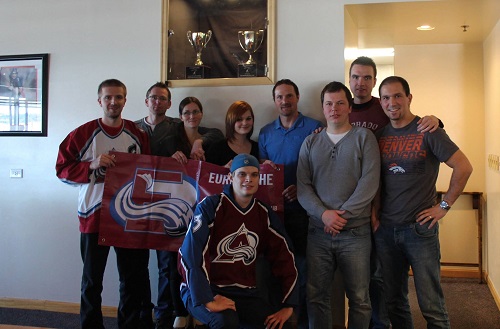 Do you attend games at the Pepsi Center?

Last year, I went to 8 or 10 games. I watch a lot of games on TV if I have time and I’m not coaching. It’s still fun to watch and follow.

How do you feel about the arrivals of Roy and Sakic?

It really helped. Last year, the team was fantastic. The team went from being one of the worst in the league to winning the division.

Are you planning on permanently staying in Denver?

Seems like it, the family’s already settled down. The kids are going to school here. We really got used to living here. We also go back to the Czech Republic. We’re also planning on going there during the summer.

Are you planning any exhibition game appearances?

We formed an alumni team last year, played some games and played against Detroit in Aspen this year, so there are games like that from time to time. Last summer, I played in an Olympics Gold vs. World Championship Gold team back home.

What do you think of the state hockey’s in in the Czech Republic?

We failed to raise as many talented players in the past 8-10 years as we did in the past. The best generations are slowly nearing their ends in the national team. There’s a big hole, which will be really difficult to fill. Slovakia’s in the same situation, even though they had success at the juniors. I don’t know if they made an error while coaching the young players, but I spoke to people from the Czech hockey scene and they told me that there are less players than the years before. Hockey’s an expensive sport. Everything was paid for during communism, the parents didn’t had to pay a penny. That’s the reason a lot of talented player, who would love to play, don’t even get a chance. Slavomir Lener told me that our generation had 45 000 youth players. Now it’s only about 16 000. The prospect pool’s small, so there won’t be so many good players.

Hejda to Eurolanche: Why we lose games