Full-story about the upcoming events in the Fan Club for this season.

The first European and the biggest Fan Club of the Colorado Avalanche, Eurolanche, enters the ninth season in its history. The organization will bring a standard service for its members and visitors of the website Eurolanche.com. The eighth trip to Denver called Eurolanche Invasion VIII will be an absolute highlight of the season. “We will fly to Colorado for the Stadium Series game against Detroit Red Wings. In total, a record number of 12 members of five different countries will come. We will visit at least seven Avalanche games. I believe it will become the best Invasion in the history. I hope that not only this trip will contribute to the amazing experience of all Eurolanche members in this season,” said Eurolanche President David Puchovsky. More details about the Invasion VIII were published recently at Eurolanche.com.

The home base for all news and breaking news stories will be Eurolanche.com as every season. Our writers will be focused on the European fans and publish at least three stories in Czech/Slovak language about the Avalanche per day. Two stories in German will be available twice a week. Additional language-versions will appear at the website occasionally. The most important part of the stories will be exclusive interviews with the current and former Avalanche players and people from the organization. The exclusive interviews will be available in English as well. “Publishing our own exclusive stories is a difference-maker for the Eurolanche in comparison with other fan-sites. We have contacts thru all over the world and we will publish next interesting exclusive stories. Many of them were sourced and quoted at various media sites or magazines in the past,” Puchovsky concluded.

Besides the stories, Eurolanche.com will offer to the Fan Club members great chance to win authentic Colorado Avalanche merchandise. Just join the sixth edition of the Eurolanche League and guess Avalanche game results correctly as many as you can. At the end of the season, first three most successful members will win souvenirs. More information about the Eurolanche League is available at this link in English language.

Eurolanche.com has been lightly upgraded and updated weeks ago. The Fan Club is going to expand its portfolio too. In the next weeks, the organization will launch the specific international website dedicated to the Stadium Series game at Coors Field. You will be noticed on this news on time. 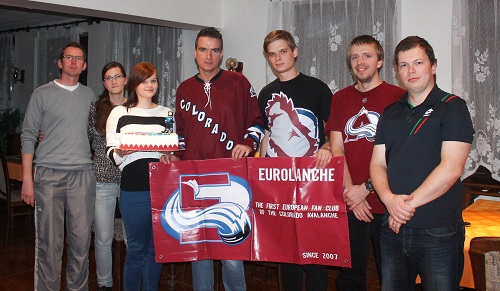 Publishing exclusive content is not sole role of the Fan Club. Make the Colorado Avalanche/Eurolanche members happy and satisfied is a key subject. As of October 8, there were 535 registered members from 36 worldwide countries. They all will be able to win the Colorado Avalanche merchandise in the different contests. The Fan Club will organize annual Fan Party weekend at some point of the season or next offseason. Members of the Eurolanche will have also a chance to send their preliminary registrations for the ninth trip to Denver called Eurolanche Invasion IX; scheduled for 2016/17 season. Members, fans, media and general public will be noticed on this news thru the official Fan Club’s website, official Facebook and Twitter accounts and in a direct-email communication. If you are a member of the Fan Club and you did not add your email address to your profile and you would like to be added to a mailing list, email your contact information to eurolanche@eurolanche.com. You can use the same address for a contact in a matter of any help, support or contribution to the Eurolanche.

The next season of 2016/17 will be the tenth in the Eurolanche history. The executive staff will start work on great events in this current season yet. You can forward on amazing year with many activities and life-time memorable experience.